Some of These Things Are Beautiful 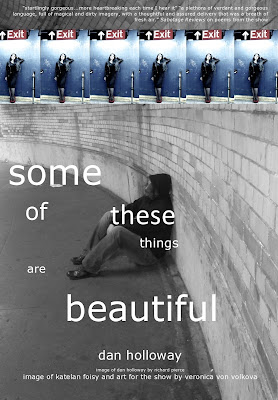 I am delighted to say that my first solo show, Some of These Things are Beautiful, will be at Cheltenham Poetry Festival on April 24th 2013.

“go out and live. And live. And go on living, because you never know when it’ll stop.” (Katelan Foisy, Blood and Pudding)

Some of These Things Are Beautiful is a lyrical, heartbreaking, but ultimately joyous picaresque across the neon-soaked night cities of the world in search and celebration of lost friends. With influences from Patti Smith and Gregory Corso to Amy Winehouse and The Kills, Some of These Things Are Beautiful is a memoir and a tribute to lives lived short, fast, and full. For people who have forgotten how to live for the moment and how to connect with each other, and a poetic tradition full of family and love that has forgotten how to write about friendship, this show carries a simple warning: cherish the friends you have while you have them. Because one day they will be gone, and all you will be able to do is try and fail to write poetry about how you wish you’d loved them more.

Dan Holloway is an award-winning novelist, poet, and journalist, and is the MC of touring spoken word show The New Libertines. His works deal with disconnectedness and the seeming impossibility of relationships in the modern world. In 2010 he won Literary Death Match with his story The Last Fluffer in La La Land, an account of the last human relationship.
Posted by Agnieszkas Shoes at 08:39 4 comments:

The Next Big Thing: Kill Land

The idea of this is that a writer puts up a post on his or her own blog answering ten questions about his/her work in progress, and then “tags” three – or five, depending on which version you see – other writers to do the same. Then, the writer posts a link to his/her “tagger” and to the people he/she is “tagging” so that readers who are interested can visit those pages and perhaps discover some new authors whose work they’d like to read. I was tagged by Jill Marsh, author of Raw material
http://jjmarsh.wordpress.com/
I have loved Jill’s work pretty much since I joined the online writing community, and it’s been wonderful following her progress recently with Triskele, seeing everything come to fruition for her. She is a writer who conveys an incredible, intense sense of place, making the land into a central character in her books.

The writers I have tagged in my turn appear at the bottom of this post.

What is the working title for your book?
Kill Land

Where did the idea come from for this book?
This book has been sitting there for longer than I can remember, waiting to be written. It combines the two things that are at the centre of all my books – how we define ourselves amid the fragmentation of our modern, virtual world; and the fallout from the collapse of the former Soviet Bloc. In this case I have taken three lives, one that is lived almost totally online, one that is the empty relic of a childhood torn apart in the dying Yugoslavia, and one that is lived completely off the grid. The lives of the three women intersect at one point – the body of a murdered charity worker who spent years in Kosovo.

What genre does your book fall under?
I don’t really know. Literary fiction I guess, with magic realist elements, maybe – Keph, a street poet, believes that she can sense when someone is about to die (and she then latches onto them to get to their innermost secrets, out of which she fashions poems so that she can keep their memories alive), and Bex, a disaffected rich teenager who spends most of her time in chatrooms, believes she can summon the souls of the dead by playing the violin. Those things aren’t treated as paranormal, they’re just – if they’re real – part of our world. Sort of the way the porous boundaries of our world work in Murakami.

Which actors would you choose to play your characters in a movie rendition?
Dani, the Kosovan refugee and now a detective working the murder investigation, would be played by Olga Fedori, who played Frieda Petrenko in Holby. The other two characters – I’d have to choose people from the poetry scene – I’d love Kate Tempest to play Keph. I don’t know about Bex, but someone in the alt lit scene would be great.

What is the one-sentence synopsis of your book?
Three women’s lives come together when a charity worker is found dead in Oxford and slowly unravel as we are led into the darkest recesses of Europe’s recent history and the human heart.

How long did it take you to write the first draft of your manuscript?
I’ve been trying to write it for about three years and now I’m ready. I aim to finish during Nano.

What other books would you compare this story to within your genre?
Ooh, very hard to say. Np by Banna Yoshimoto for the mix of the banal and everyday, the slightly surreal and the stomach-turning; Elfriede Jelinek’s The Piano Teacher for the intensity of the interplay and the use of sex as a painkilling distraction. Of course Dubravka Ugresic’s Ministry of Pain, the book about the break up of Yugoslavia and its consequences. Stylistically, like a lot of my writing it’s both lyrical and minimalist in a mix of Murakami and Tao Lin way, and structurally it’s got a lot in common with some of the Kundera books I admire most like The Book of Laughter and Forgetting and Immortality. It might be easier to do an “if you like this you’ll like” playlist, which is what I usually do to get something of the mood and feeling of my books across – for all I love the conceptual and experimental, my work is deeply emotional, and the emotion the reader feels is the thing that matters most:
Video Games

Who or what inspired you to write this book?
I think much of it comes down to being a student from 1989 onwards, first with the fall of the Berlin Wall and then following the collapse of the Soviet Bloc, the imploding of Yugoslavia and the horrors of Kosovo. All that and a burgeoning fascination with Young British Art.

What else about your book might pique the reader’s interest?
Well, people who have read my work before will be pleased (or sickened) to learn that the usual motifs are there – there’s an exhibition at an art gallery where the laws of physics are suspended (I don’t think I’m capable of writing a book without a supernatural art gallery any more. I don’t think I’d ever want to read a book without one, and when I do read books without one, that’s always the thing I think would make it better); there is also no discernible plot, no attempt to resolve the undiscernible plot, lots of loud music and few if any physical descriptions of the characters. Other points on the Dan’s writing checklist – no male characters of any note or roundedness other than dead one, lots of music, set in Oxford, very few scenes set during the hours of daylight, the occasional highly graphic piece of sickening ultraviolence in amongst general gentleness, lots of action takes place online.

*** The following three writers are all exceptionally talented, which is why I am tagging them for The Next Big Thing.

Born and raised on the Canadian prairies, Dianne Greenlay saves lives by day (she is a physiotherapist in a remote sole charge clinic as well as a retired EMT and frequently hears from her patients, "You gotta help me with this pain - it's just killin' me!" - so she does, and they seem to live through it), and she tells lies by night (as any entertaining fiction writer would do). She is also an amateur playwright and Creative Director of a long-running community theatre group.
Her debut novel, Quintspinner - A Pirate's Quest is the first book in an intended trilogy, and the pirate topic came about as the result of a Google search gone wrong. Quintspinner has gone on to win multiple awards in Best YA, Best Commercial, and Best Historical categories.
Dianne is fluent in at least her mother tongue and she thanks her fierce english teachers for that. More of her thoughts on life can be found at www.diannegreenlay.com .

John A A Logan

John A. A. Logan is the author of The Survival of Thomas Ford (winner of a Special Award in the eFestival of Words Best of the Independent eBooks Awards 2012), and Storm Damage. His fiction has been published by Picador, Vintage, Edinburgh Review, Chapman, Northwords, Nomad, Secrets of a View, and Scratchings; with reviews of his work in Scottish Studies Review, Scotland On Sunday, The Spectator, and The Hindustan Times.His work has been published internationally in anthologies edited by A L Kennedy, John Fowles, Ali Smith, Toby Litt; and he has been invited to read his work at the Edinburgh International Book Festival.
John blogs on the 11th of each month for Authors Electric, and is also a member of the League of Extraordinary Authors, and the Alliance of Independent Authors (where The Survival of Thomas Ford is currently “Book of the Month” for November)
www.johnaalogan.com

Cameron is originally a Scot but now naturalised French. Writes in several genres under different pen-names and has two new full-length novels coming out at the end of the year. Passions include motorbikes and dogs.