through me and you to the edge
Posted by Agnieszkas Shoes at 14:48 4 comments:

Year Zero (not) at the Oxford Literary Festival

If you want to spend lots of money listening to the same old same old from the middle of the mainstream, then you may want to go to the official site for the Oxford Literary Festival.


But if you want to comeand hear the most exciting contemporary literature there is, FOR FREE, in Oxford, at Oxford’s best and coolest bookstore, The Albion Beatnik, then hang around here, learn about Year Zero Writers, the globally acclaimed international collective turning their back on the publishing world and delivering the very best literature, direct to readers. Stop and download all our books, including 6 full-length novels, FREE, then come along and hear. 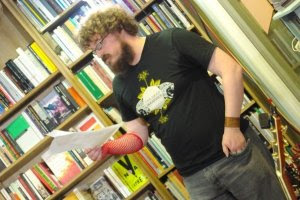 
Our very first gig was held at Oxford’s coolest shop, The Albion Beatnik, back last October. And we loved it there so much we’ve foisted ourselves upon poor Dennis once again.


The Albion Beatnik is everything an Independent bookstore should be – it serves coffee in mugs you can hand pick from the shelf (I always drink out of Sylvia Plath, and there’s not many can say that :p); it specialises in books on jazz and by and about the Beat Poets; it has an in-house artist; and it’s an incredible venue for reading and music.


This gig promises to be extra special because it’s slap bang in the middle of the Oxford Literary Festival, and Year Zero intend to show the literary establishment just what live literature SHOULD be, and put on a party that no one will forget. Oh, and there may just be a little announcement…


In keeping with the spirit of this fantastic venue, we will stuff the programme full of our work that’s been influenced by Beat culture:
Daisy Anne Gree – The Dead Beat
Dan Holloway – Songs from the Other Side of the Wall; A Life Drawn Freehand
Larry Harrison – Glimpses of a Floating World
Ali Cooper – The Girl on the Swing 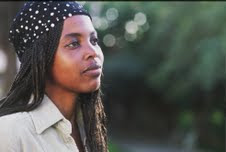 STOP PRESS! Music and poetry will be provided by the amazing Christi Warner. Christi is a Namibian singer, songwriter, playwright & poet: “a wordsmith with a stylistic savvy and has a voice that can be gentle as an angel’s breath or on occasion, caustic as a lemon tart.” (Randall Parish, U.S based marketer & reviewer). Her music “isn’t fast-food R&B. It’s the underground nu-soul classic that your mother said you should put on repeat…” (Namibian Sun Newspaper).

You can hear Christi here.

Posted by Agnieszkas Shoes at 01:29 5 comments:

Wow! How quickly 6 months go by! Later in the month I will complete a 6 month review, but for now, here are the stats from February. Apologies for the delay. I am now Officially Back :)

19th - publicity for teh gigs on Authonomy blog

This was a disappointing month in terms of figures, and it has taught some valuable lessons, that I hope to start learning straightaway. To wit,

Well, I know now that I've already had some more sales that I hadn't been expecting, so this is slightly artificial, but I will forecast 8 sales, and will stick to 400 downloads in the hope that the spike at the end of February continues, and in anticipation of, I hope, some good results from Read an ebook week, from March 7-13th, which is being heavily promoted on Smashwords.
Posted by Agnieszkas Shoes at 01:56 2 comments: 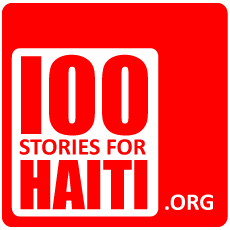 This is just to tell you a little bit about a wonderful project put together by Greg McQueen, a long-time online writing friend. I'm sure many of you will already know about 100 Stories for Haiti, but for those who don't, please check it out.
Greg received 400 submissions for the book, from which 100 were selected, by some wonderful writers, all of them with an uplifting feel. It's a wonderful project, a great example of what can be achieved when people come together and decide to do something.
Please go and buy this book. It's a wonderful cause, and an amazing collection of stories, including many from people you'll know like John Booth and Kirsty Logan.

Posted by Agnieszkas Shoes at 00:53 3 comments: 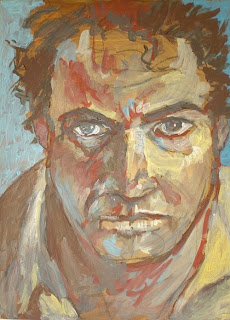 This is one of those events that makes me wish I lived Stateside. Very very best to Jerry and the other artists.
Posted by Agnieszkas Shoes at 06:30 4 comments:

Thaw: A cool way to say hello to a new book

I love interesting ways of doing things in the literary world, so I'm delighted to be taking part i the Blogsplash for Fiona Robyn's new book, Thaw. Thaw is published by Snowbooks, and you can order it here. You can also read a chapter a day for the next 3 months on the Thaw blog. In order to launch the project, Fiona has enlisted a whole host of bloggers to take part in a Blogsplash, for which we will all be posting chapter One today.


These hands are ninety-three years old. They belong to Charlotte Marie Bradley Miller. She was so frail that her grand-daughter had to carry her onto the set to take this photo. It’s a close-up. Her emaciated arms emerge from the top corners of the photo and the background is black, maybe velvet, as if we’re being protected from seeing the strings. One wrist rests on the other, and her fingers hang loose, close together, a pair of folded wings. And you can see her insides.

The bones of her knuckles bulge out of the skin, which sags like plastic that has melted in the sun and is dripping off her, wrinkling and folding. Her veins look as though they’re stuck to the outside of her hands. They’re a colour that’s difficult to describe: blue, but also silver, green; her blood runs through them, close to the surface. The book says she died shortly after they took this picture. Did she even get to see it? Maybe it was the last beautiful thing she left in the world.

I’m trying to decide whether or not I want to carry on living. I’m giving myself three months of this journal to decide. You might think that sounds melodramatic, but I don’t think I’m alone in wondering whether it’s all worth it. I’ve seen the look in people’s eyes. Stiff suits travelling to work, morning after morning, on the cramped and humid tube. Tarted-up girls and gangs of boys reeking of aftershave, reeling on the pavements on a Friday night, trying to mop up the dreariness of their week with one desperate, fake-happy night. I’ve heard the weary grief in my dad’s voice.

So where do I start with all this? What do you want to know about me? I’m Ruth White, thirty-two years old, going on a hundred. I live alone with no boyfriend and no cat in a tiny flat in central London. In fact, I had a non-relationship with a man at work, Dan, for seven years. I’m sitting in my bedroom-cum-living room right now, looking up every so often at the thin rain slanting across a flat grey sky. I work in a city hospital lab as a microbiologist. My dad is an accountant and lives with his sensible second wife Julie, in a sensible second home. Mother finished dying when I was fourteen, three years after her first diagnosis. What else? What else is there?

Charlotte Marie Bradley Miller. I looked at her hands for twelve minutes. It was odd describing what I was seeing in words. Usually the picture just sits inside my head and I swish it around like tasting wine. I have huge books all over my flat — books you have to take in both hands to lift. I’ve had the photo habit for years. Mother bought me my first book, black and white landscapes by Ansel Adams. When she got really ill, I used to take it to bed with me and look at it for hours, concentrating on the huge trees, the still water, the never-ending skies. I suppose it helped me think about something other than what was happening. I learned to focus on one photo at a time rather than flicking from scene to scene in search of something to hold me. If I concentrate, then everything stands still. Although I use them to escape the world, I also think they bring me closer to it. I’ve still got that book. When I take it out, I handle the pages as though they might flake into dust.

Mother used to write a journal. When I was small, I sat by her bed in the early mornings on a hard chair and looked at her face as her pen spat out sentences in short bursts. I imagined what she might have been writing about — princesses dressed in star-patterned silk, talking horses, adventures with pirates. More likely she was writing about what she was going to cook for dinner and how irritating Dad’s snoring was.

I’ve always wanted to write my own journal, and this is my chance. Maybe my last chance. The idea is that every night for three months, I’ll take one of these heavy sheets of pure white paper, rough under my fingertips, and fill it up on both sides. If my suicide note is nearly a hundred pages long, then no-one can accuse me of not thinking it through. No-one can say, ‘It makes no sense; she was a polite, cheerful girl, had everything to live for,’ before adding that I did keep myself to myself. It’ll all be here. I’m using a silver fountain pen with purple ink. A bit flamboyant for me, I know. I need these idiosyncratic rituals; they hold things in place. Like the way I make tea, squeezing the tea-bag three times, the exact amount of milk, seven stirs. My writing is small and neat; I’m striping the paper. I’m near the bottom of the page now. Only ninety-one more days to go before I’m allowed to make my decision. That’s it for today. It’s begun.
[read more every day here]
Posted by Agnieszkas Shoes at 00:28 1 comment: